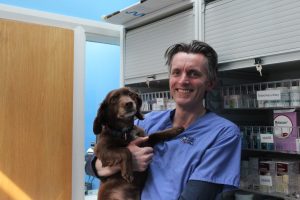 Having had an enthusiasm for wildlife since a little boy I qualified from Veterinary College in 1997 in Dublin and apart from one year in mixed practice have spent all my time in small animal practice. I worked in the UK for eight years and five years of those were spent working for the RSPCA Hospital in Manchester. While there I developed a keen interest in animal welfare. I also spent eighteen months in London and worked with the PDSA charity Hospital in Bow East London.

I love all aspects of practice and enjoy meeting new clients and animals every day. I took over in Terenure in 2006 and opened a new clinic in Dundrum in early 2011.

Sadly my little dog Mario passed away last year. Sally a friendly little terrier arrived in the practice in the summer and has remained ever since! Away from practice my passion is following the Irish Rugby team (not always rewarding!!) music, both listening and playing, running and swimming!