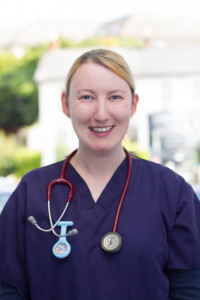 Laura joined South Dublin Vets in August 2013. Coming from a 10 year background in childcare and running her own business from home, she decided she wanted a career change and pursue what she really wanted, which was to work with animals. In 2011 she completed a Fetac level 5 in Animal Care and in 2012 a Level 6 in Advanced Animal Care and Veterinary Nursing in Dun Laoghaire Further Education Institute.

Laura lives in Ballinteer and has 2 dogs called Hollie and Nero and a cat called Kad. In her spare time she love to walk in Ticknock and the Hell fire Club with them and they also love a good run and swim on the beach.

Her other hobbies include indoor wall climbing, reading, singing, playing Flute and Piano. She is also a goal keeper for my Gaelic football team Ballyboden Wanderers.