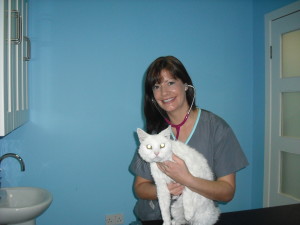 Adrienne qualified as a veterinary surgeon from UCD in 1997. Following graduation she moved to Sheffield to work in a busy small animal hospital. On returning to Ireland in 1998 she joined a small animal and pig practice in Naas where she worked for several years before the travel-bug set in and she headed down-under to New Zealand, working as a locum in small animal clinics as she travelled.

Adrienne returned to Ireland in 2002 and worked again in a busy companion animal practice in Kildare before joining South Dublin Vets in 2007.

She has a young daughter, Ada, who keeps her more than busy outside of work. They have a cuddly, black cat called BC.